We are looking for the best dog walking routes on Exmoor. It’s up to you to decide what makes it the best – a river for your dog to swim in or a pub with a beer and lovely food for you at the end of it, we don’t mind!
Please submit up to 10 photos and a description of your favourite #Exmoorwalkie by email to exmoor4all@gmail.com
Don’t forget to tell us the name of your dog(s)!

All entries will be published on Exmoor4all (FB/website). If all goes to plan, we are  putting a little book together with a collection of #Exmoorwalkies, featuring your favourite walks and your photos.

PS The small print:  By submitting your photos and text you allow us to use these in our publications (print & digital). 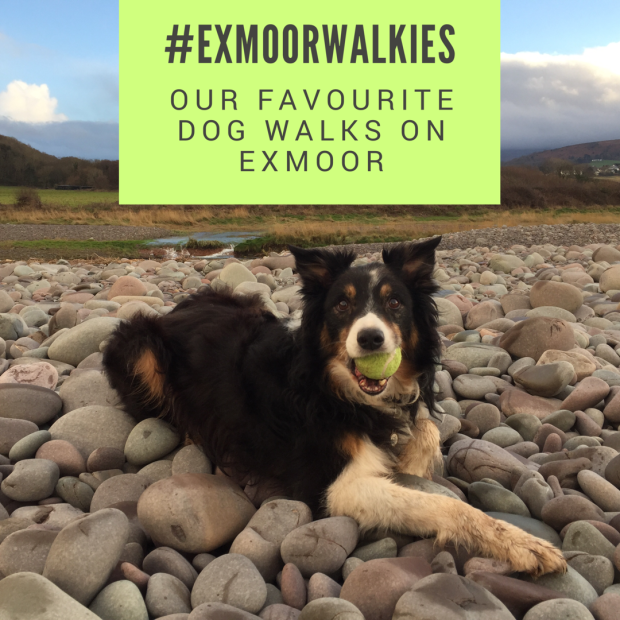 Visitors to Minehead can now get a bird’s eye view of the town, coast and countryside  from this new the observation wheel which will be at the seafront for 8 weeks this summer.

Campers will be hoping for stars in their eyes at the Big Adventure Family Camp Out on Saturday 13 August at Wimbleball Lake (TA22 9NU) in Exmoor National Park.

The event, organised by the National Park Authority, is ideal for first time campers and a chance to camp out in a wonderful location. The site opens at 4pm when there is time to set up camp and cook dinner after which there will be activities to enjoy. Tents need to be down by 11am on Sunday 14 August.

National Park ranger Adam Vasey says: “We’re really lucky to be able to offer this camping experience here on the shores of Wimbleball Lake.  Not only have we got the family camping area especially reserved for us, but we’ve got storytelling, a camp fire, guitar playing as well as a bat walk and, when it gets dark, some astronomy (weather permitting).

“It’s a really friendly environment for first time family campers so don’t be scared, there’ll be people to help out and everyone is welcome!”

The camp site has easy access to the cafe and children’s play area, with beautiful walks and a cycle trail around the lake itself. Facilities include showers, toilet block and washing up facilities; the site is also dog friendly. Exmoor National Park is an International Dark Sky Reserve and Wimbleball Lake is a Dark Sky Discovery Site – so here’s hoping for clear skies.

Booking for the Family Camp Out is essential, for more information and to book please visit:

events.constantcontact.com/register/event?llr=vjzs4adab&oeidk=a07ec82aef9fa6d8bc2  or telephone the National Park Centre in Dulverton 01398 323841

Images show the recent Family Camp Out at Horner Wood 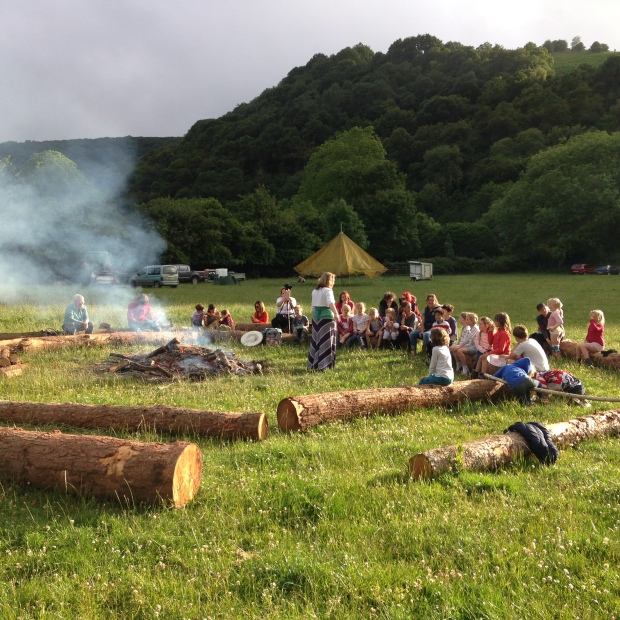 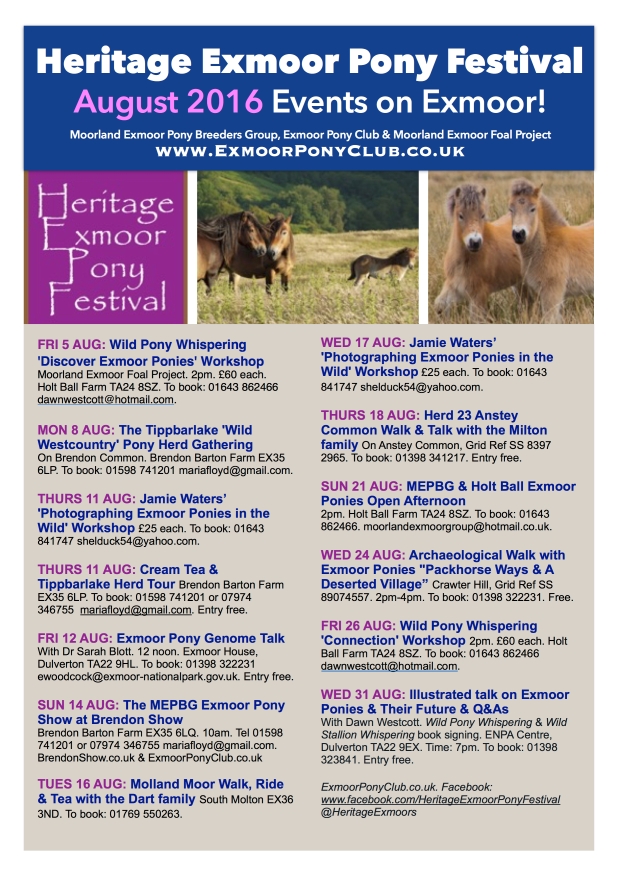 The twin towns of Lynton & Lynmouth are in the middle of the rugged Exmoor coastline with Lynton 500 feet above Lynmouth and the two towns connected by a cliff funicular railway. Five reasons to visit Lynton & Lynmouth this summer include open air Macbeth, the most scenic of Devon cream teas, a new arts trail, scenery that influenced the Romantic Poets and riding a water powered funicular.

See Macbeth in the Valley of the Rocks

New for this summer is the Pleasure Dome Theatre, an open-air theatre set in the dramatic and beautiful scenery of The Valley of The Rocks near Lynton.  The Pleasure Dome Theatre are an artistic collective with the aim of using the natural landscape of the area to make Exmoor a cultural destination as well as a tourist hub. Their first performance is Macbeth which will be running from August 2nd until the 20th.

The National Trust’s Watersmeet House is a 19th century fishing lodge with a beautiful Edwardian tea garden. Living up to its name, Watersmeet is where the East Lyn and Hoar Oak Water meet and cream teas can be enjoyed overlooking the rivers and spotting herons and dippers. Watersmeet is also located along some of Exmoor’s best walking and so makes a great spot for a mid-hike rest.

Indulge in Exmoor culture on the Arts Trail

Exmoor Arts Trail is a new concept which makes it easy for people to engage with art, craft and photography on and around Exmoor. Through-out the year visitors to Exmoor can use a web page with a clickable map that shows participating venues on the Trail including art and craft shops and galleries, eateries which have art on the walls, art and craft workshop venues and artists and artisans with studios which are open to the public.

Take a ride on a water powered funicular

No trip to the towns of Lynton and Lynmouth would be complete without a trip on the water powered Cliff Railway, formed through an Act of Parliament in 1888 which gave perpetual right to extract up to 60,000 gallons of water a day. The funicular is an exciting way to travel between these two historic towns. Enjoy stunning views of the North Devon Coastline as you glide up and down the 862-foot length of track from Lynmouth nestling at the foot of the cliffs to Lynton perched 500 feet above.

Channel your internal Romantic poet on the Coleridge Way

Walk up to 51 miles through the stunning Somerset countryside of the Quantock Hills, the Brendon Hills and Exmoor, a landscape that inspired Coleridge to produce some of his best known work. At Lynmouth the path links with the South West Coast Path National Trail. A delightful 30-mile circular walk can be made by walking from Porlock on the Coleridge Way to Lynmouth and returning along the coast path.

For more information on Lynton and Lynmouth visit http://www.visit-exmoor.co.uk

A free, fun family adventure day for all ages around Simonsbath and Blackpitts, Exmoor National Park

This  ‘drop in’ event will feature the Bogstacle course, stream dipping, live bats, the opportunity to visit one of the South West’s last remaining operational water powered sawmills, and lots more all-weather and undercover activities. There is something for everyone! Entrance is free, although some activities may request a small charge. There are toilet facilities and food available on site – parking at Simonsbath, follow the Bogtastic signs.

Held during UK National Park’s Week and in the month of International Bog Day, Bogtastic is the South West’s biggest and best bog festival celebrating the special qualities of Exmoor’s bogs, heritage and wildlife. Over 400 people attended last year!

The UK has 20% of the World’s blanket bog and Exmoor is fortunate to have some of this rare and fascinating habitat.  This unique and internationally important landscape is often considered to be the UK’s equivalent of Brazil’s exotic rainforest. Not only is it home to numerous endangered species and a carnivorous plant, the sundew; it naturally stores carbon dioxide and water.

Exmoor National Park ‘has some of the finest and unique examples of bogs in the UK. Bogtastic is a festival of fun and learning – a great opportunity to learn more about this special landscape and Exmoor’s amazing wildlife and heritage’ Morag Angus (Exmoor Mires Partnership).

Bogtastic coordinator Lucy McQuillan says: ‘Bogtastic is great fun for all ages so do come and join in the fun, please wear outdoor clothing, wellies and bring spare clothes.”

Following on from last year’s successful event which was attended by more than 400 people, Bogtastic 2016 takes place on Tuesday 26th July from 10am to 4pm in and around Simonsbath.

This free family event is a fun adventure day celebrating Exmoor’s wildlife, moorland and heritage with many activities and displays.  In Simonsbath, the River Barle flows past the historic water-powered sawmill, under the old stone bridge and by a meadow, along a beautiful moorland valley. Here you can play games and go stream dipping to find out about the river’s wildlife – fish, otters, birds, bats and creatures you’ve never seen – it’s a great place for a picnic too. Take a minibus up the hill to where the sky larks sing at Blackpitts and explore the bogs full of multi-coloured mosses.

Held during UK National Park’s Week, Bogtastic is the South West’s biggest and best bog festival. This  ‘drop in’ event will feature the Bogstacle course, live bats, the opportunity to visit one of the South West’s last remaining operational water powered sawmills, and lots more all-weather and undercover activities. There is something for everyone! It is free entry, with toilets and food on site and locally. Bring your wellington boots and dress for any weather – there is shelter in case it tries to rain.

See you at the welcome tent!

Entrance is free, although some activities may request a small charge. For further information on Bogtastic please contact: Lynmouth National Park Centre on 01598 752509 or visit www.exmoor-nationalpark.gov.uk or the facebook page. 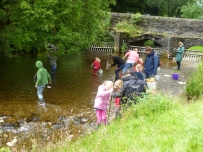 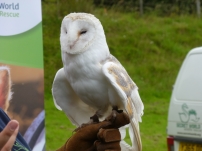 Big Adventures off to a flying start

This year’s Exmoor National Park Big Adventures got off to a flying start with more than 300 people enjoying the Big Moorland Adventure at Haddon Hill recently. With family friendly games, bush-craft skills, orienteering and scavenger hunts, there was plenty to keep everyone entertained.

National Park ranger Adam Vasey said: “It was fantastic to see so many people enjoying being outdoors and although the weather wasn’t perfect it didn’t seem to dampen anyone’s fun.

“We’d like to thank the volunteers that helped us set up and run the event, we couldn’t do it without them and if anyone would like to help us with the upcoming Big Adventures please get in touch.”

The next event in this series is the Big Woodland Adventure at Nutcombe Bottom just outside Dunster (TA24 6TA) on Wednesday 1 June from 10am-4pm. With family games and activities lasting all day, there will be plenty to enjoy for all ages. Car parking and toilet facilities are available on site – there’s no need to book and no charge, but donations to CareMoor for Exmoor will be welcome.

Camp out in one of the most amazing locations on Exmoor at The Big Adventure Family Camp Out @ Horner from Saturday 18 June to Sunday 19 June. Booking is essential – the site opens from 4pm and there will be a chance to set camp and cook your dinner with activities starting from 6pm including story-telling, bat walks and astronomy with the Dulverton Stargazers. Tents should be taken down by 11am the next day.

Space is limited for this special event which is ideal for first time campers with support on hand for help with tasks like putting up tents, so early booking is recommended via the National Park Centre at Dulverton on 01398 323841.

There are hundreds more events on the Exmoor National Park website – for more information visit: www.exmoor-nationalpark.gov.uk or call in at one of the National Park Centres at Dunster, Dulverton and in the Lynmouth Pavilion. 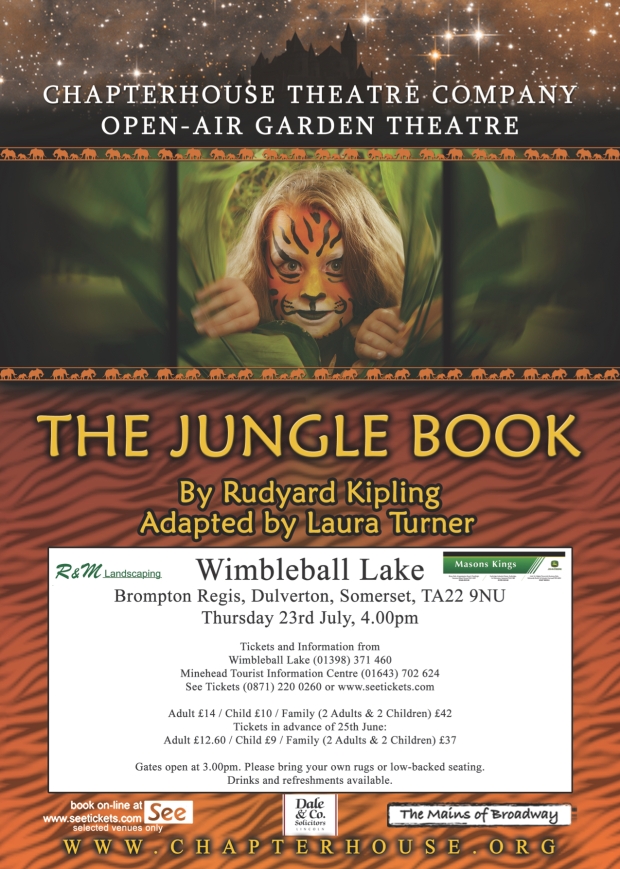